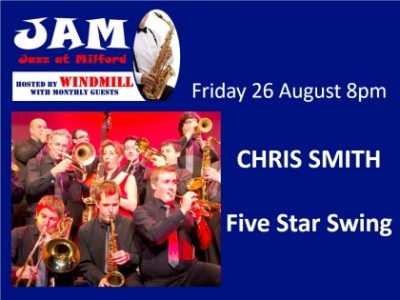 “Everyone was up dancing!” – Blenheim Palace.

From subtle background atmosphere to lively music for a full dance floor, Five Star Swing’s attention to detail and etiquette is assured by Chris Smith’s vast experience plus top professional musicians.  The musical genres performed are vintage 1920’s to 1960 specialising in Glenn Miller, Sinatra, Big Band, Jazz and even some Blues Brothers and Motown!

Five Star Swing was featured in the National theatre tour of TV’s “Military Wives” and “BUGLE BOY” – the Glenn Miller Musical Story! – Chris Says, “I’ve been brought up with this style of music, as my father, Chris Smith Snr’, played trombone for Frank Sinatra on his European tours and the famous Ted Heath Big Band – we recreate a great fun atmosphere with Five Star Swing, enjoyed by the band and all generations.”