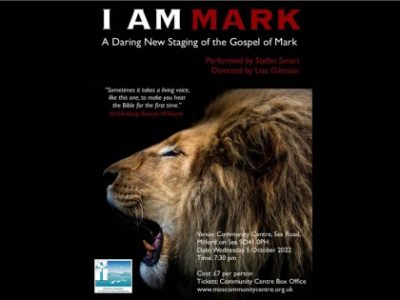 Action-packed with no less than 19 miracles, the book of Mark was written to be shared live with first century audiences, in one sitting.

Aimed at those outside the Jewish faith, the book of Mark has the potential to capture 21st century hearts and minds like no other story.

In this dynamic new, word-for-word, solo performance, directed by Lisa Gilmour, Stefan Smart brings us the story as it was originally narrated.

I AM MARK is the resulting full-bodied drama, with its characters and nuances brought startlingly to life.

Because it’s so accessible and involving, I AM MARK has the added advantage of being a great conversation opener.

So sit back, relax, and imagine yourself among Mark’s first audience, as you experience the Good News of Jesus ‘as it was in the beginning’, in all its urgency and power, challenge and comfort.

A cup of tea or coffee will be served during the interval.