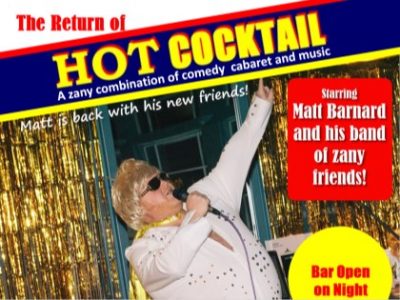 Matt Barnard returns with his bunch of zany friends for a hilarious evening of comedy cabaret and music.

Matt has performed across the world as a compere, actor, musician, singer and as himself in his unique one man show.

He was the resident compere of the cult Sensation Seekers Stage at the Glastonbury Festival, starred in London’s oldest variety show in the West End in and performed his unique act at the famous London Palladium. He also appeared in the Hollywood movie Mrs Henderson Presents in which he performed the famous sand-dance with Gareth Jones

He has won many awards for his solo show including at the Feldkircher Gaukler Theatre Festival in Austria.