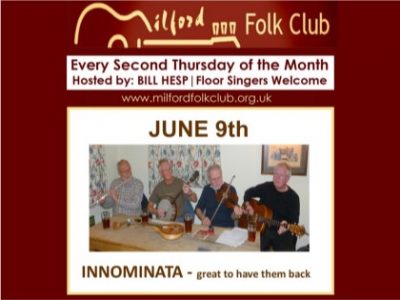 Welcome back to Innominata

A long-established Hampshire based folk group who perform a variety of traditional tunes and songs from the UK, Brittany and Ireland. The band plays a variety of instruments and also sings traditional songs, both accompanied and a capella.

The group was formed in 1981 when high-flying surgeon and flamboyant fiddler Peter McDonald strolled into Hardware House in Romsey and asked the proprietor, Dave Butterfield, if he could play the banjo. Dave still claims that he can! Soon other musicians were found.

Several metamorphoses over the intervening years have produced the current four-man line-up, of whom two (Dave and Mike) are founder members. The repertoire still consists of tunes and songs from all over Great Britain and Ireland, with the occasional Breton and Eastern European influences thrown in.

Pay on the door