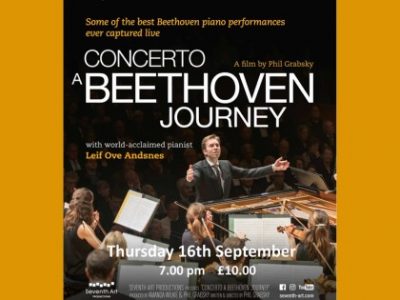 Filmed over the course of four years, Award-winning filmmaker Phil Grabsky and his Seventh Art team followed leading concert pianist Leif Ove Andsnes’s attempt to understand and interpret one of the greatest sets of works for piano ever written: Beethoven’s five piano concertos.

However, Concerto is more than a portrait of a famous musician on tour; it is an exploration into Ludwig van Beethoven’s life as revealed by these five masterworks. The relationship between the composer and his world is mirrored by the relationship between the pianist and orchestra in these concertos. The film seeks to reveal Beethoven in a way rarely seen before and bears witness to what is increasingly being regarded as one of the greatest interpretations ever of these five great pieces of music.