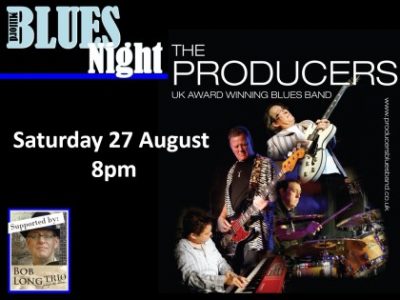 Hosted by Bob Long, the guests this evening are award winning UK band: The Producers

It was over 25 years and thirteen albums ago that the Producers first appeared on the UK music scene and since then they have gigged their version of the blues in clubs, theatres and on major festival stages worldwide and they continue to do so.

The development of the band over that time has seen seven line up changes but the founders of the band, Harry Skinner and Dave Saunders remain in place and the latest and longest incarnation (now ten years old) features Ray Drury (keys) and Biff Smith (drums). It was this line up that produced the acclaimed London Blues album of 2011.

Following on from London Blues was always going to be tough but the 2016 anniversary of the band has inspired a return to the values of the Producers’ first album (‘Escape from Muswell Hell’ 1992). Rhythm and Blues is the order of the day here and this album offers four new original songs along with a selection of tunes that the band have used live over the last twenty five years but never previously recorded.

Their latest album is unashamedly raw and gutsy, it offers a response to the sophistication of London Blues and above all it re-connects the band to its past.