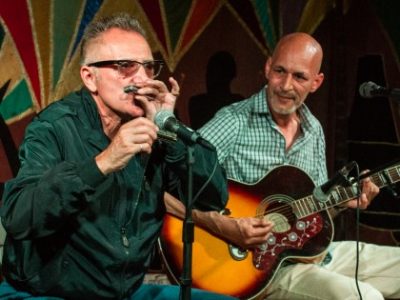 Paul Lamb:
Respected worldwide as Europe’s top Blues musician and entertainer, Paul Lamb has forged himself a place in the history books as one of the greatest players of our time. He has won countless awards, sold record-breaking quantities of albums, and performed the world over with his longstanding musical compatriots The King Snakes. Inducted into the British Blues Awards Hall of Fame ( alongside the likes of Peter Green, John Mayall & Alexis Korner ) Lamb continues to bring his infectious brand of music to fans around the globe…..
Chad Strentz:
There’s a whole deal of experience behind vocalist and guitarist Chad Strentz. Billed as one of the best Blues singers in Europe, Chad started out as a rockabilly hound at the age of 15. He enjoyed success on this circuit in the U.K. and Europe. In 1991 he got together with Paul Lamb & they toured extensively with The King Snakes and released over 10 CD’s to much acclaim. With Chad, you will find in his voice and guitar playing a blend of music ranging from blues, soul, rockabilly and more.