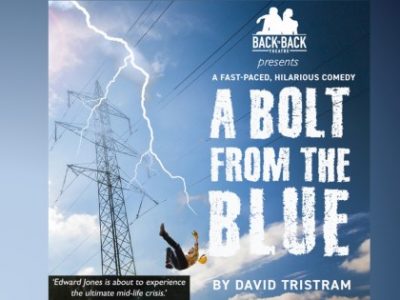 Back to Back Theatre present “A Bolt from the Blue”

Edward Jones was just an ordinary man, doing ordinary things – until the day before his 40th birthday. What happened next was, quite literally, incredible. It defies belief. It defies logic. It defies the fundamental laws of science and nature. But it happened. And it came like a bolt from the blue. This unmissable fast-paced comedy takes you on Edward’s outrageously funny and truly incredible journey of self-discovery.

David Tristram is one of the UK’s most popular modern playwrights. This quirky comedy showcases his trademark hilarity, tingles every nerve ending and jangles every human emotion. A poignant and unusual story with an extraordinary conclusion!