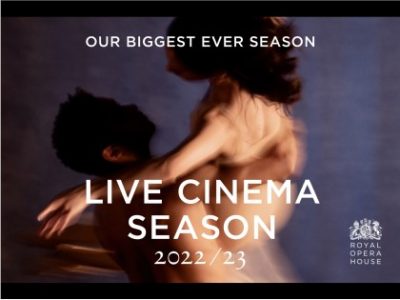 Set in 19th-century Japan, Puccini’s heart-rending opera tells the tale of Cio-Cio-San, a young geisha who falls in love with an American naval officer –and pays the ultimate price.

A dazzling showcase marking 60 years of the Friends of the Royal Opera House.

The Nutcracker – The Royal Ballet.  Sunday 11 December at 2pm

Discover the enchantment of ballet with this sparkling festive treat for the whole family.

The Barber of Seville – The Royal Opera.  Thursday 16 February at 7pm

With vocal fireworks, scheming lovers and one very busy barber, Rossini’s comic opera is packed with fun and mischief.

A new production of the much-loved Royal Ballet fairytale classic.

The Marriage of Figaro – The Royal Opera.  Sunday 30 April at 2pm

The Sleeping Beauty – The Royal Ballet.  Wednesday 24 May at 7:15pm

Magic and fairytale characters are brought to life through ballet in this well-known family favourite.

A devastating curse rises from the ashes in Verdi’s monumental tale of superstition and rivalry.